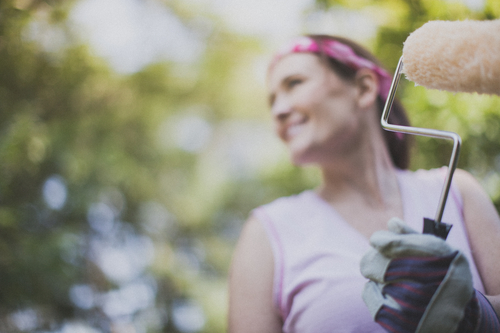 Are You a Work in Progress?

Gideon teaches me that even Heroes of the Faith sometimes:

In the time of Gideon, the Israelites were being attacked by nearby enemies. Their crops and animals were being stolen and/or destroyed. God appears to Gideon and appoints him to be The One who saves Israel from those enemies.

Gideon looks at the world around him and says, “God, where are you?”

The first thing the angel of the Lord says to Gideon in Judges 6 is, “The Lord is with you, you mighty warrior.” In response, Gideon says, “nuh-uh.” Actually, he says, “If the Lord is with us, why has all this bad stuff happened to us? … The Lord has cast us off, and given us into the hand of our enemy.” (Judges 6:13)

Gideon looked at the world around him, saw how troubled it was, and assumed God had vacated the premises. Gideon was really saying, “if God cared about me, only good things would happen in my life.”

It’s tempting to measure God’s love based on our current situation.  The better we feel about our life circumstances, the more blessed we think we are and the more we feel God loves us. But as Gideon’s story teaches us, God is present with us even when times are tough. In fact, sometimes it takes a difficult circumstance for us to surrender our self-sufficient attitudes. When we move beyond an “I’ve got this” attitude, we discover God’s love and the supernatural peace that passes understanding.

Gideon felt he was the least of the least, but God saw him as a work in progress.

Even though the angel of the Lord calls Gideon a “mighty warrior,” the angel seems to have it all wrong. Gideon is hiding his wheat in a winepress because he doesn’t want the Midianites to take it. Gideon isn’t a warrior, he’s a wimp.

When God tells Gideon he’s been chosen to save Israel, Gideon says, “how can I deliver Israel? My clan is the weakest in Manasseh, and I am the least in my family.” (Judges 6:15)

Perhaps this is why God chose Gideon. Maybe God wanted someone who was in touch with his own limitations. Maybe when Gideon identified himself as the least person in the weakest family, God thought “a-ha, now that I can work with.”

In a world where so many people feel powerless, surely this is good news. Our powerlessness isn’t an impediment to God, it’s our opportunity to see God at work.

[shareable]Our powerlessness isn’t an impediment to God, it’s our opportunity to see God at work.[/shareable]

When Gideon asked, “how can I possibly do this impossible task,” God responded by saying, “I will be with you.” (Judges 6:16) In other words, God says, “Gideon, we will do this together. I will work through you.”

Gideon could only fully be himself when God was working through him.

This is true for us, too. God has created us—actually, God is creating us—to work through us.

You are a cherished character in the story God is creating.

Your struggles, your loves, your fears, your tears, your laughter, your compassion, your sins—out of these details God is writing the story of the universe.”

Father McIntosh asks, “Why is God creating you?” That can be a very penetrating question if we are brave enough to really ponder it.  Why is God creating me? What do I uniquely bring to God’s creation? In what ways am I God’s work in progress?

God grants Gideon multiple victories and Gideon is heralded by all the Israelites as being super-awesome. The Israelites invite Gideon to begin a dynastic leadership that will pass to his sons and grandsons. Gideon declines their offer and, correctly, points them back to God. (Judges 8:23)

But then Gideon builds a golden statue and, in the end, “all Israel prostituted themselves to it.” (Judges 8:27) This is especially ironic because in the beginning of Gideon’s story he was known by the name Jerubbaal, meaning “one who fights against a false god.” (See also 2 Samuel 11:21 (where Gideon is called Jerubbaal).)

Here, too, I relate to Gideon. Like Gideon, I know God. I have experienced the love and provision of God in deep and powerful ways. And yet, I make my own statues of gold. I get caught up in materialism and culture and my own abilities.

Maybe it’s Gideon’s imperfections that make him a hero.

The best part of Gideon’s story is that we remember him as a Hero of the Faith. (Hebrews 11:32)

Isn’t it wonderful that Gideon isn’t required to be perfect? The biblical record about him hasn’t been scrubbed clean to make it seem like he always made the right choices. Instead, we learn how God used Gideon so many centuries ago to deliver Israel from their enemies and we see how God is continuing to use Gideon’s story to save us from ourselves today.

What do you think? Do you feel comforted by Gideon’s status as a Hero of the Faith despite his mistakes? Would you feel better if he were more perfect? Why do you think God is using you as a work-in-progress today? Tell me about it in the comments, in an e-mail, on Facebook, or on Twitter.