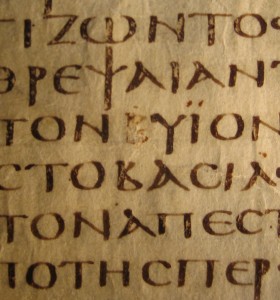 Is the Bible missing some verses? The short answer is, not really, but sort of.

You’ll need to have at least one King James Version and one New International Version Bible on hand for this exercise. Most of the time electronic Bibles work well, but this exercise plays out a little better with physical Bibles.

Have one volunteer with a KJV Bible read Mark 16:9. Ask the volunteer with the NIV Bible if there are any notes before Mark 16:9. The footnote in the NIV for Mark 16:9 refers to the “earliest manuscripts” or “other ancient witnesses” and explains that verses 9–20 are absent from those texts.

Have volunteers read each of these verses in both the KJV and the NIV:

You will find that these verses are present in KJV Bibles but absent from the NIV and some other translations. Why?

Originally the Bible did not have any chapter or verse notations.  The chapter notations were added in the 13th century and the verses were numbered in the mid-16th century.

A Parisian scholar named Robert (Estienne) Stephanus produced four editions of the Greek New Testament from 1546-1551. He is credited with the addition of verse numbers.

The King James Version is an English translation from Stephanus’s 1550 printing of the Greek New Testament. Those verse numbers continue to carry the day.

After Stephanus completed his translation we gained access to older manuscripts. We tend to think older is more reliable, or closer to the “original.” When an older manuscript is missing a verse, we know the verse was added at some point later.

When Bible scholars omit a verse, they don’t change the verse numbering. If they did, it would be hard to talk about anything that comes after a missing verse, for example, Matthew 17:22-27. The uniformity of verse numbers supports study and discussion of the text.

Compare Matthew in the 1550 text and the Codex Sinaiticus.