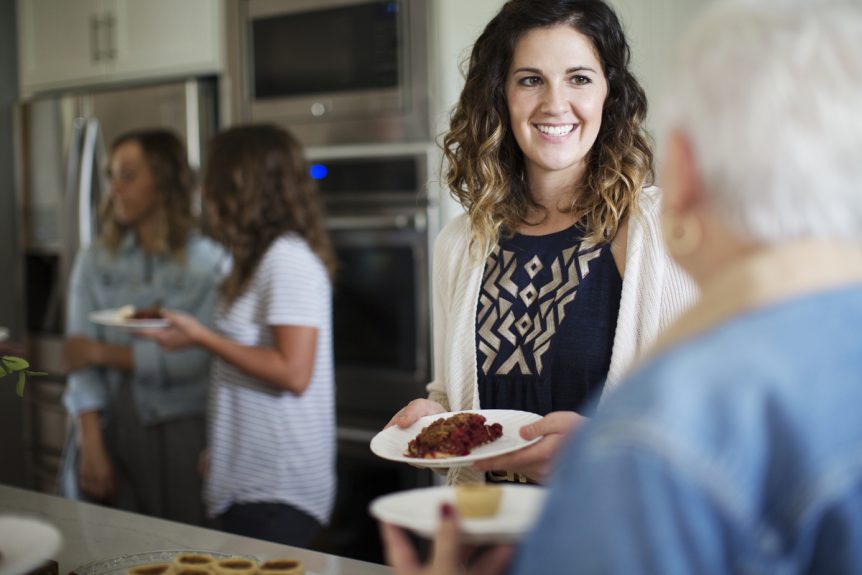 At least once every summer, we throw a party for the church youth group. They come to our house and play games, swim in the pool, and eat pizza. Although it might sound like insanity to some people, we love having a house full of teenagers!

Second, we put out a whole basket of clean towels. No one has to come into the house wet because it’s easy to grab a towel on the way in.

The third key to having a party for a whole horde of teenagers is to have more food than they can eat.

My husband, Stephen, always says it’s better to have leftovers than for someone to feel left out.

It’s an unusual thing for Stephen to say, not because he isn’t generous—he’s actually a very generous person. It’s an unusual thing for him to say because he hates leftovers. A few years into our marriage, I realized we had a bunch of storage containers for leftover food taking up cabinet space FOR NO REASON. We never used them, so I gave them away!

Although we don’t normally like leftovers, it’s different when a group of hungry teenagers is coming over. On nights like that, we make it our goal to have leftovers. It’s a matter of hospitality.

As the crowd approached, Jesus asked Philip, “Where are we to buy bread for these people to eat?” (John 6:5). The Gospel says this was a test. Jesus already had a plan, but he wanted to give Philip a chance to think about it.

Philip replied, “Six months’ wages would not buy enough bread for each of them to get [even] a little.” Then Andrew, Peter’s brother, chimed in, “[well] there’s a kid over here who has five barley loaves and two fish, but what are they among so many people?” (John 6:8-9)

That’s how we feel when we look at the world today, isn’t it?

Not only because people are hungry. I live in Florida where experts say 1 in 5 children is hungry right now. This year, 1 in 7 people in Florida will receive help from a food bank. So, yes, people are physically hungry.

People are also hungry to know they are loved, to know that they matter.

When I look at the reality of that physical, spiritual, and emotional hunger, it’s easy to feel like Philip and Andrew—“I don’t know what it will take to feed this crowd, but it’s more than I can give.”

And yet, I remember the miracle of the feeding of the 5,000.

The feeding of the 5,000 is a beautiful reminder that Jesus loves us so abundantly, there’s enough for leftovers.

This story of the feeding of the 5000 is all about abundant bread and how it represents the abundant life that comes from the abundant love of our abundant God.

When Philip and Andrew say there’s just not enough, Jesus doesn’t chastise them. He doesn’t criticize their way of thinking, accuse them of thinking too small, or tell them to work harder to find a solution.

Instead, Jesus redefines what is possible.

In our world, we tend to like cautious calculations. If you’ve ever worked with a retirement planner or a financial planner, what do they always say? They tell you about how a particular fund or investment opportunity has performed for the last five or ten years, and then they say “past performance is no guarantee of future results.” In fact, Securities & Exchange Commission Rule #156 requires them to tell us that. We can’t base future results on past performance.

Philip and Andrew knew how far a loaf of bread and a fish would go. They knew five loaves and two fish would not go far enough to feed the hungry crowd.

But in the hands of Jesus, our abundant God, those five loaves and two fish outperformed any past performance.

So much so that there were leftovers.

What do you think? Have you found God to be abundant? Do you ever feel overwhelmed by what you lack? Do you think the miraculous feeding of the 5,000 isn’t actually miraculous at all? Tell me about it in the comments, in an e-mail, or join the discussion on my Facebook page.