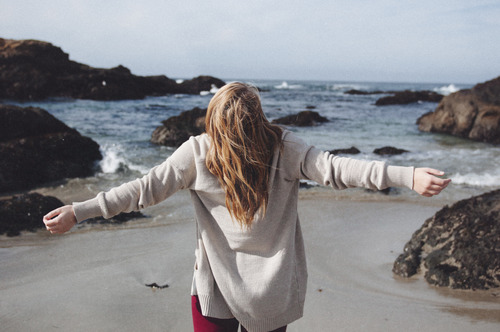 I used to think I had the power to make my life whatever I wanted it to be. I thought careful planning and intentional decision making would get me everything I wanted, everything I deserved.

I refused to acknowledge my helplessness. Admitting I could not do it all would surely cause chaos and, possibly, planetary re-alignment. In short, I was afraid the world would end if my own capability failed.

The planning and intentionality and decision-making crashed into the reality of my helplessness. In the aftermath of the crash, I discovered I was free to lean into helplessness and release my white-knuckled grip on the illusion of control.

My helplessness revealed itself in infertility.

My husband and I are the against-all-odds high-school sweetheart success story. Mathematically speaking, I have been in love with Stephen Demme for more than half my life.

When we decided to start a family, we assumed pregnancy was an easy choice. But after a year of trying, after a year of ovulation monitors and calendars full of personal data no woman should have to track, I still wasn’t pregnant.

We went through IVF and continued to pray for a pregnancy. I assumed it would work. In fact, I was pretty sure we’d have multiples – twins or triplets at least. It sounds incredibly naïve now, but at the time I thought having the money to pay for IVF was a sign from God directing our decision-making.

I was looking at our circumstances for affirmation, rather than looking to God for guidance.

After just one failed IVF, the fertility specialist told us there was no reason to try again, it would never work for us.

Can I tell you something that might surprise you? The doctor’s certainty was a gift. We’ve met couples who suffered through years and years of infertility. Good people who endured repeated disappointments and the heartbreak of miscarriage(s).

We were spared that tribulation. Instead of wading through the painful-unknown, we dealt with the reality of our helplessness.

We didn’t choose to let go, we simply had no power to hold on.

Building a family was the first time my husband and I experienced helplessness. Before infertility we had experienced only success. We had made a marriage, a home, and a business, but we couldn’t make a baby.

Being powerless drew us closer to each other and closer to God.

We pursued adoption and waited as the days, then weeks, then months of the calendar fell away.

As we waited for the day we could hold our baby, I began to see God wasn’t a detached, omniscient being. He was present with me in ways I had never understood or experienced before. I discovered a sixth sense – the sense of peace that exceeds understanding talked about in Philippians 4:7.

I can see, hear, touch, taste and smell, but I also have a sense of peace to tap into, especially when I feel helpless.

My sense of peace carried me through the helplessness all the way to motherhood.

On November 13, 2002, my husband and I stood in a maternity hospital in a small coal-mining town in Russia and held our precious son for the very first time. Two and a half years later we returned to Russia and adopted an amazing baby girl.

If I had not experienced infertility, I don’t think I would have found the peace of God. I would probably still cherish the illusion of control. Now, instead of being chained to that illusion, I know the freedom of helplessness.

Have you experienced this — the freedom of helplessness?

There’s a bit of a catch. I couldn’t experience freedom without first experiencing helplessness. I couldn’t feel the joy of receiving God’s presence until I understood the loneliness of his absence.

Maybe you’re facing something tough today. Maybe you’re in a season when you feel helpless or alone. Look beyond this season, my friend. There will be a day when you look back on this and rejoice for what you are learning right now.

You may be helpless, but that doesn’t mean you are weak.

Have you experienced strength and freedom in the midst of helplessness? Tell me about it in an e-mail or on Twitter or Facebook.