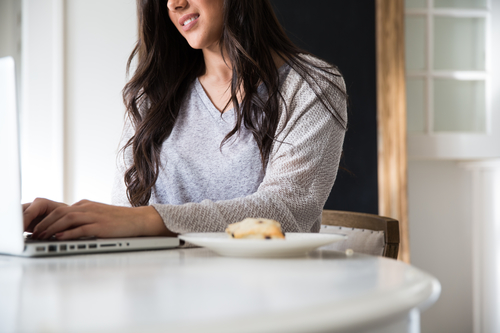 How I’m Making Fear Disappear One Click At A Time

I recently remarked to a friend that I am coming up on my 2-year blog-a-versary. “Wow, that’s great. What have you learned so far?” she asked. It was an innocent, but paralyzing question. I tried to play it off with a silly answer, “I’ve learned that blog years are like dog years, only maybe longer.”

If I had been more self-aware at that moment, I would have said: “Two years ago, I did one of the scariest things I’ve ever done, and I’m so glad I did!”

You might not be on the verge of starting a blog, but you can probably relate to the fear I felt. You may even have let fear delay or deter a dream you have.

Blogging has shown me that fear disappears with practice.

In the beginning, I dreaded blogging because my words felt too permanent. I knew I wouldn’t be able to erase or retract my words if my writing was awful.

I thought of my permanent record from school. I was always a good student, but the idea of my permanent record would make me break into cold sweats. I envisioned it as a thick black folder, its contents holding an indescribable power to deliver me into either a brighter future or <gulp> the school equivalent of Gehenna.

We tell teenagers today they are growing up in a different world because their lives are documented on social media. Teens today face the biggest expansion of “The Permanent Record” since the invention of the mimeograph machine (if you’re under 40, go ahead and Google it). My decision to launch a blog was a choice to open myself up to evaluation, with every negative review going on my proverbial permanent record.

Now, two years later, sharing my written words is not as scary.

Initially, I thought only of the downside of making my words part of my Permanent Internet Record.  I thought people would judge me harshly, but they don’t. People are kind and encouraging, and they don’t seem to care about my mistakes nearly as much as I do.

I also didn’t anticipate or appreciate how much I would learn from making mistakes. Even posts that make me cringe when I re-read them teach me something—they teach me what not to do again.

I strive to improve constantly, but mistakes are part of the process.

As my daughter told me one time when she was practicing piano, “you’re supposed to make mistakes when you practice.” She never fell in love with the piano, but that nugget of wisdom was worth every cent we spent on lessons!

I am learning to embrace progress over perfection. Like my daughter and the piano, practice might never make me perfect, but it will make me better.

I have also seen how fear warps my writing. One time I wrote something, published it, and then thought “WAIT! I don’t actually think that’s true!” In the post, I suggested that God was a micro-manager. The subtle backside of my conclusion was that God allows, or even creates, brokenness so he can redeem it.

As I reflected on it (after I hit “publish”), I realized I had heard this point of view from other people, but it didn’t reflect my personal experience with God. Afraid to say what I really believed, I wrote a piece to meet other people’s expectations about God.

I decided at that point I had to rely on what I personally knew of God rather than trying to write what other people might have experienced with God. It’s not that everything I believe is right, but I only know what I know, you know?

Two years ago, this button was my nemesis; the embodiment of my fear:

I’ve now hit that button more than 100 times. Every Wednesday morning, it gets a little less scary. Each week I’m learning that fear disappears with practice.

What about you? Has fear gotten in the way of your dream? Have you faced it down? What stops you from moving forward? Have you found that making mistakes are part of your process? Please take a minute and tell me about it in the comments, in an e-mail, or on Facebook.