What’s In Your Bible?
Maybe Your Family History

In an ad campaign by Capital One, stars from Jennifer Garner and Alec Baldwin to Samuel L. Jackson have asked, “What’s in your wallet?”

I guess they would be pretty disappointed by my wallet. My husband and I decided a long time ago to avoid credit cards as if they were the plague. (I do have 1 – I’m not an animal!—but it’s not from Capital One.) I also rarely carry cash these days, so my wallet has been reduced to this little pocket on the back of my cell phone. 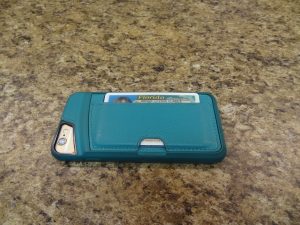 Apologies to Jenny, Al, and Samuel L., my wallet is basically empty.

For the last two weeks, you’ve sent me awesome pictures of marked up Bibles. This confirmed for me, again, that you are my people; we are “of a mind.” You have generously opened your Bibles and invited me inside your private world.

This week I want to share three special stories with you. These photographs and the stories sent with them have reminded me that as much as we treasure the words of the Bible, we can also treasure the Bible itself.

The Bible gives us a pathway for building our relationship with God, but a Bible can also build a pathway for a family to build upon through multiple generations.

These stories all belong to other people. I try to treat them with the care and respect they deserve.

First, I want to tell you about Joy’s family Bible.

This antique Bible is on display in Joy’s home, always open to the verse in Ecclesiastes read at her wedding. 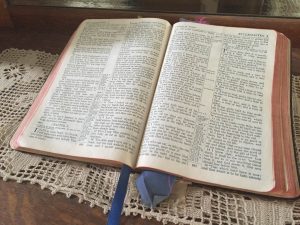 This Bible is a unique family treasure. It was presented to Ernest and Martha Stoehne in 1926 in celebration of their marriage. This Bible bears witness to more than a century of marriages and births. 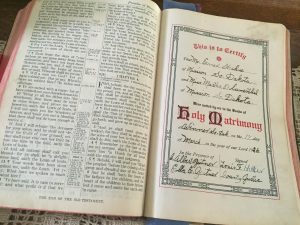 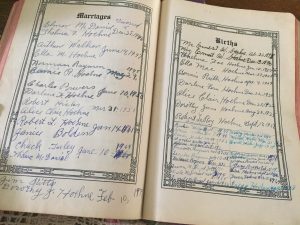 This family Bible is part of a tradition that seems to have flourished in the United States following the Civil War. Researchers and collectors who treasure these Bibles sometimes find “locks of hair, pressed flowers, photographs and letters” in them.

The handwritten notations in Joy’s Bible were done for a purpose. This is the careful recording of important information. Information that was important enough to be kept where it would not be lost or thrown away. Information that needed to be recorded where later generations would be sure to see it.

As Joy’s ancestors recorded family milestones in this Bible, they recorded more than genealogy. This Bible also recorded the family’s generational connections to God.

Bibles that are passed down from generation to generation can connect us with lost family members in a unique way.

The underlining, notes, and bookmarks in this Bible were placed by Sheri’s late grandmother. 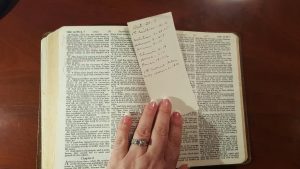 Sheri’s grandmother is gone, but her handwritten notes remain fresh. The note on this page says, “My tears are always wet because I have forgotten to forget.” Like Sheri’s beloved grandmother, I too have shed tears because I was unable or unwilling to forget. Her grandmother’s note reminds me of Psalm 56 where the writer asks if God has kept our tears in a bottle and made a record of them. Sheri’s Bible is a perfect place to keep her grandmother’s precious tears safe. 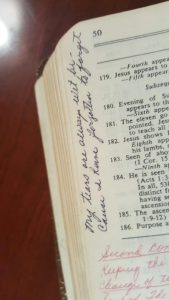 Her grandmother’s notes started as indelible words on a page, but they are now permanent love notes on Sheri’s heart.

Sheri told me that when she sees her grandmother’s notes and underlining it’s as if her grandmother is still speaking to her. Sheri is comforted by this legacy; grandma’s Bible is one of her most cherished possessions.

The third, and final, story for this week is about another gift from another grandparent.

Tracie received this Bible from her grandfather in 1998. 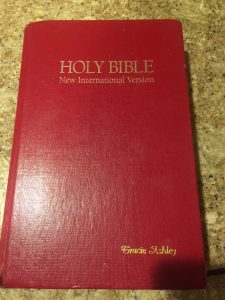 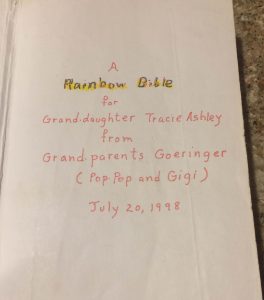 Tracie was one of 13 grandchildren who received this exact Bible from Pop-Pop and Gigi. Pop-Pop called this a “Rainbow Bible” because he personally went through it with a red pencil and highlighted the promises of God he wanted his grandchildren to know about. 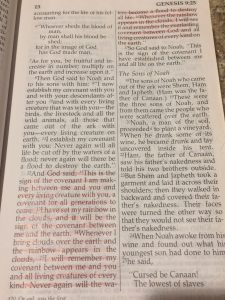 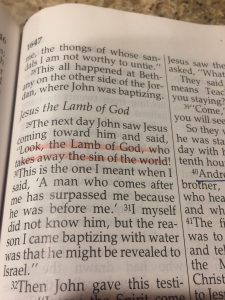 Imagine the time Tracie’s grandfather took and the prayers he prayed for each of his grandchildren as he prepared those Bibles to be gifts. He didn’t want to give them only a book, he wanted to give them the gift of knowing God’s promises for their lives.

What’s in Tracie’s Bible? Promises from God reiterated by her grandfather.

What’s in Sheri’s Bible? Handwritten notes from her grandmother calling her attention to scripture and simultaneously reminding her of the woman who loved her so well.

What’s in Joy’s Bible? An entire family history sitting aside the verses read at Joy’s own wedding.

These Bibles are treasured for both their scriptural content and their personal content. These Bibles have connected generations of owners with the God who loves them.

What’s in your Bible? Next week we’ll look at Bible highlighting and note-taking. I would love to see inside your Bible. E-mail me, contact me via Facebook, or you can even send me a tweet.