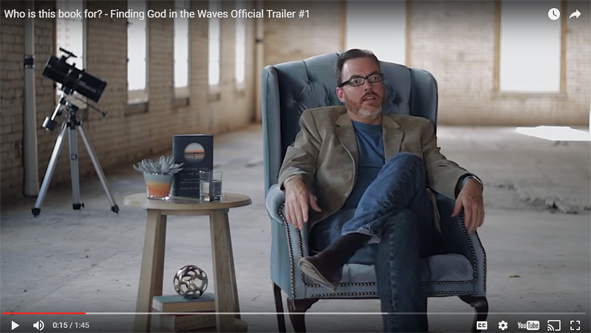 A Biased Review of Finding God in the Waves

Mike McHargue’s debut book, Finding God in the Waves, was released on September 13, 2016. This is the story of how one man lost his faith, and found it again, through science. Mike went from Southern Baptist to Atheist to Unspecified to Methodist. I want you to read his book. Here’s why.

I cannot write an unbiased review of this book. I hope you’ll understand.

I first met Mike back in his days as a devout Southern Baptist.

Back then, Mike was the kind of Southern Baptist I would not talk to about faith. Not because there was anything wrong with him (or his church), but because I felt inadequate.

Back then, my faith already had a pitted patina. His faith seemed shiny and easy.

I experienced faith as something deeply private and personal, but his faith was an integral part of his identity. He didn’t need to wear a shirt that said, “DEACON,” because … well, because you could tell. At least, having lived in the South my entire life, I could tell.

I knew he and I probably had different ideas about the Bible. Mike admits in the book, he “once made fun of a friend for saying, ‘God is bigger than the Bible’”—just the kind of thing I might say.

Then in 2012, Mike organized a local showing of the movie Blue Like Jazz. I loved the book and saw the author, Donald Miller, speak two or three times. I participated in the Kickstarter campaign to fund the production costs of the movie.  I was part of the Save Blue Like Jazz Movement!

I was surprised Mike liked the book and even more surprised he was an Extra in the movie. Blue Like Jazz is subtitled, “Nonreligious Thoughts on Christian Spirituality.” It’s about Donald Miller’s bumpy faith journey, his seeking a genuine encounter with God, and how church sometimes got in his way.

Remember – I thought Mike had a shiny, easy faith. I thought Mike was a “company man” when it came to church. I was confused about why Blue Like Jazz resonated with him.

In the years since Blue Like Jazz, I’ve learned that Mike’s faith is just as pitted and bumpy as anyone’s.  I’ve heard him speak, I’ve listened to him on podcasts, I’ve read his blog (since the days it was just Facebook posts), I’ve talked to him over dinner.

Because I know Mike’s story, I thought the book would feel redundant.

Mike uses his uber-nerd science mind to look at faith from a neurological perspective. Here’s an example:

In the modern, Western context, we tend to view our beliefs as a set of ideas, which means we often associate mastery of a subject with people who can best articulate the ideas behind their beliefs. …

But when you scan the brains of believers, you find that their understanding of God is nonverbal, more akin to a feeling or experience than a set of ideas. This is why Christians are usually stumped if someone asks them, “What is God?” Contrary to what some skeptics say, it’s not because these people’s belief system is unsophisticated or simplistic. Instead it’s that their experiences with God aren’t primarily associated with the language center of the brain.

If, like me, you have a slightly lumpy faith, you can appreciate how difficult it can be to describe either God or falling in love. Both are mysteries that defy language. Mike uses science to help us understand why that’s the case.

I was especially interested in how Mike’s feelings about the Bible evolved during his journey through atheism and back to faith.

The Bible is a big part of why Mike lost his faith.

I think Mike’s experience with the Bible is actually a pretty common one.

Early in the story, Mike describes the Bible this way: “I believed the Bible was inspired and inerrant, which is Baptist-ese for saying that God wrote the Bible, and, therefore, it is perfect. In this way of thinking, the Bible is accurate in whatever it talks about, including science and history.”

When Mike read the Bible four times in one year, he began to question its inerrancy. He “noticed that Genesis 1 says trees were made before the stars.” This was a problem for Science Mike because, as he explains it, “Genesis says we were formed from dust, but cosmology tells us that you don’t get dust—unless you have stars first. Without dust, you don’t have the material to make trees or humans. There were no trees in our universe before there were stars.”

Mike knew from studying astronomy, physics, and other science stuff (technical term), that the order of Creation in Genesis and modern scientific understanding don’t agree.

As Mike’s ability to accept biblical inerrancy disintegrated, so did his belief in God.

Through a series of mystical encounters and uncompromising love from his family, Mike found God again. It’s not that God was ever lost, but Mike’s ability to acknowledge and receive God turned off for a period of time.

As someone who wants to help people see the Bible as manageable and meaningful, I take to heart how the Bible cost Mike his faith.

Finding God in the Waves offers hope to those who find themselves (or someone they care about) in a tangle where the only choices are to either (a) accept the Bible or (b) turn away from God.

Mike uses a fantastic metaphor for explaining how he sees the Bible now. He compares it to a song he wrote for his wife, Jenny:

Mike, like me, now finds echoes of his own story in the pages of the Bible, without requiring it to be a perfect text.

Why do I think you should read Finding God in the Waves? Because I think you will find yourself in Mike’s story. No one’s faith is as shiny and easy as it seems from the outside. Mike’s story is a great example of why and how we can continue to pursue faith even when it doesn’t make any sense. 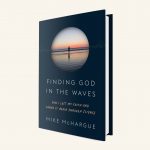 Want to borrow my copy of Finding God in the Waves? How about if I give you a copy? E-mail me and let me know you read this blog post. I’ll put all the names in a hat and on 9/20/16 at 5:00pm EDT I’ll pick one. I’ll contact you via e-mail if you are the winner. (Only those who receive mail at a U.S. mailing address are eligible to win.)