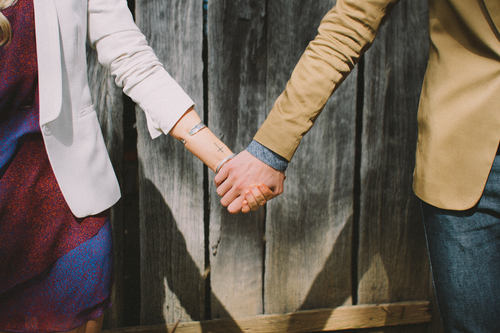 What if the Cross Really Is About Suffering?

Is there an image of Jesus that makes you uncomfortable? I’m thinking in particular about a crucifix I once saw in Nicaragua. It was sculpted and constructed in such a way that I felt I could almost hear Jesus moaning. The way the blood flowed from the nail holes, how his feet were stacked, and especially how his hair seemed matted down by dirt, sweat, and blood made for a compelling, but gruesome, image.

I used to think these images were constructed to inflict a sense of guilt, but I don’t see it that way anymore.

Now I see that images like this offer a sense of consolation. That gruesome crucifix in Nicaragua communicates to the people who visit Iglesia San Francisco that Jesus is with them in their suffering.

What at first seemed to me to glorify suffering in order to put people down, actually communicates solidarity with the hope of lifting people up.

The crucifix didn’t change, my understanding changed. Maybe my need for compassion changed or my underlying understanding of how deeply I need God changed.

One of the most common images of Jesus I have seen in churches (and homes) is Warner Sallman’s early 20th-century painting of a rather serious, but content looking, Christ. You might recognize it.  Christianity Today once called it “The Face That’s Everywhere.” It’s a stark contrast with the crucifix I saw in Nicaragua which was similar to Grunewald’s Christ at the center of the Isenheim altarpiece. 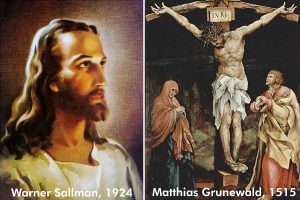 Do you relate more easily to one of these images than the other? Why?

Theologian R.A. St. Clair shares a story about working at an inner-city church where the pastor compiled her own hymnbook. The pastor intentionally left out any hymns mentioning blood or the cross because she didn’t want to glorify the suffering of Jesus. The pastor didn’t want it to seem like God chose, or even condoned, the suffering her congregants endured. The pastor “did not want them to conclude that poverty, addiction, poor education, and the violence often associated with [their lives] were crosses they were divinely commanded to bear.”

The pastor forgot that those who suffer can find solidarity with Christ on the cross—solidarity in suffering.

And yet, I know we sometimes contort the image of God such that we think suffering is God’s will. Every time there’s a major natural disaster, there seems to be a pastor somewhere in America who declares it to be God’s judgment. (Here’s an example.) Once, I met a woman who had been told by a pastor that her late-term miscarriage was God’s judgment for her sins. She spent years trying to understand what sin she had failed to repent for that cost her baby’s life, and I was left wondering why God didn’t protect her from bad theology.

God is good. God loves us. God does not impose suffering as a punishment.

As John Wesley explained, suffering is “entirely contrary to [God’s] own nature, and destructive of his noblest works.” In the Methodist church we sometimes use A Modern Affirmation as our creed. In that Affirmation we quote Psalm 145, God’s “mercy is over all his works.”

God has compassion and mercy for us, not an intention to punish us with suffering. God knows we bring on enough of our own suffering, God doesn’t need to send more.

Besides, the idea that God punishes us with suffering sort of renders the cross impotent, doesn’t it? As if Jesus didn’t quite suffer enough to satisfy God’s rapacious appetite for torment.

What if God doesn’t have an appetite for torment at all, much less one that is insatiable? Perhaps some people have an unquenchable thirst for the suffering of others, but we shouldn’t make God in our image—that’s the ultimate distortion.

The gruesome nature of the crucifix no longer horrifies or repels me. Instead, I’m letting those images remind me that God so fully entered into the human experience, he too experienced suffering.

What about you? Is there an image of Jesus that makes you uncomfortable? Do you think Jesus suffered for us, with us, or both? Why? Tell me about it in the comments, in an e-mail, or on Facebook.