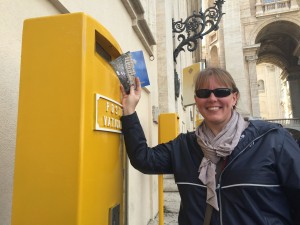 I went to church and saw a dead finger.

It wasn’t my church and, luckily, the finger wasn’t just sitting there.

I was in a church in Rome called the Basilica of the Holy Cross in Jerusalem.

We wound our way through the church to a special room with several reliquaries (containers for holy objects).

One of the reliquaries held a piece of Jesus’s cross. Another housed the Titulus Crucis, the wooden plaque that hung above Jesus on the cross, stating he was King of the Jews. One reliquary contained two thorns from the Crown of Thorns, and another had a nail used in the crucifixion. And then, top left of the display case, there it was … the finger of the Apostle Thomas. 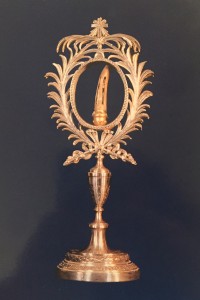 I know what you’re thinking: “Yeah, right, Beth. I can’t believe you thought that stuff was real.”

Please suspend your skepticism for a moment, if you can.

It was surprisingly easy for me to accept the authenticity of these items standing face to face with them, including The Finger.

Maybe it’s part of how I’ve been trained throughout my travels. We tend to trust museums, don’t we? When the American Museum of Natural History in New York tells me this is the skeleton of a T-Rex, I believe them: 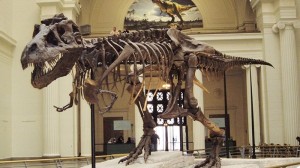 Standing in front of The Finger it seemed genuine to me. But now, less than a week later, I can feel my skepticism starting to rise again.

This is ironic considering I was supposedly seeing the finger of THE Apostle Thomas.

The Bible tells us little about him, but these seven verses are the story for which he is most well-known:

When it was evening on that day, the first day of the week, and the doors of the house where the disciples had met were locked for fear of the Jews, Jesus came and stood among them and said, “Peace be with you.” … But Thomas (who was called the Twin), one of the twelve, was not with them when Jesus came. So the other disciples told him, “We have seen the Lord.” But he said to them, “Unless I see the mark of the nails in his hands, and put my finger in the mark of the nails and my hand in his side, I will not believe.”

A week later his disciples were again in the house, and Thomas was with them. Although the doors were shut, Jesus came and stood among them and said, “Peace be with you.” Then he said to Thomas, “Put your finger here and see my hands. Reach out your hand and put it in my side. Do not doubt but believe.” Thomas answered him, “My Lord and my God!” Jesus said to him, “Have you believed because you have seen me? Blessed are those who have not seen and yet have come to believe.”

Despite everything Thomas experienced with Jesus (including the resurrection of a man named Lazarus (John 11)), Thomas didn’t understand what was happening when Jesus was crucified. Thomas didn’t expect a Resurrection. When his friends told him it had happened, he didn’t believe them. It was too incredible, too fanciful, too unlikely.

When the story of Jesus is told correctly, it elicits this reaction. It is too incredible, too fanciful, and too unlikely.

Jesus was not offended by Thomas’ doubts. Instead, Jesus honored his doubt and showed up in an incredible way.

Why? Because questions and doubt are not the opposite of faith.

I think he’s right. And yet, too often church people are afraid of doubt and afraid that doubt signifies a lack of faith.

If you feel rejected by a church or Christians because of your doubt, I want to encourage you to keep looking. There are churches and Christians who aren’t afraid of your doubts or your questions.

If you have been introduced to a god who is too small for your questions and doubts, you haven’t been introduced to my God. If you’ve never “heard” God’s voice, it’s okay. If you aren’t sure God is listening when you pray, it’s okay. If you think Christians are crazy, and the Bible is boring, it’s okay. I still want to be your friend… and if you are brave enough to face those questions on Easter Sunday of all days, I will save you a seat at my church because I get it my friend, I really do.

God is big enough to handle your doubts and patient enough for your questions.

The finger of Thomas I saw in Rome may, or may not, be the real deal. But seeing a relic that has been revered for hundreds of years because it connects us to someone who doubted left me feeling encouraged.

What about you? Do you struggle with doubt? Have you been to Rome or seen any relics? Tell me about it in the comments, in an e-mail, or on Facebook.