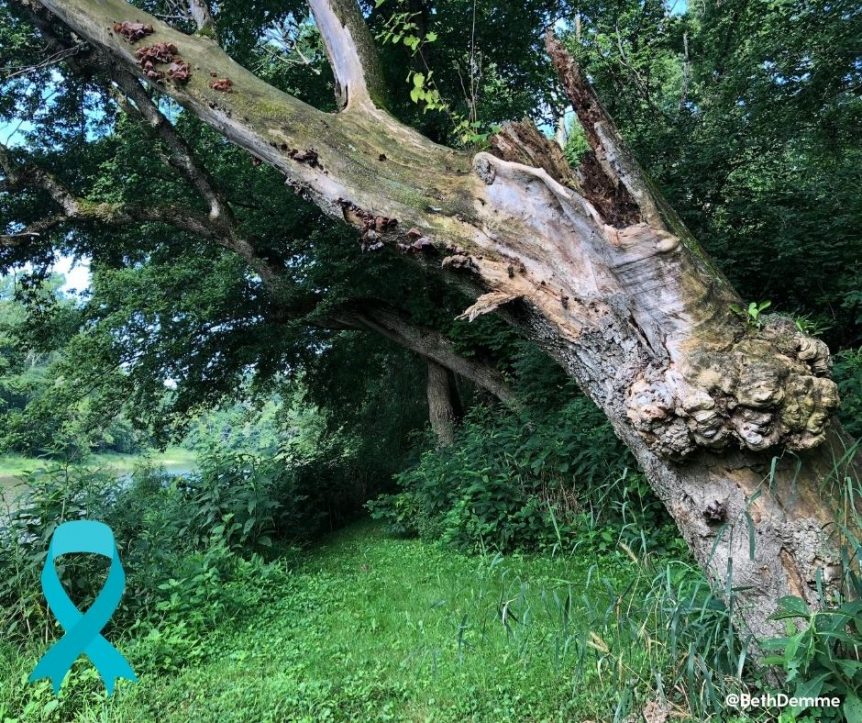 September is Ovarian Cancer Awareness month. I am a survivor. I want you to survive, too. I want the women in your life to have a best-case scenario like I did. Here’s a piece of my story.

I had been going to the doctor every few weeks for months. There was a “situation” we were monitoring. At every visit, my gynecologist assured me there was nothing to worry about.

In August 2018, I went for a routine CA-125, a blood test that checks for signs of Ovarian Cancer. I was on a retreat with friends when I got the call that my numbers were … A-OK! Perfect! Exactly where we wanted them! My friends rejoiced with me and prayed over me.

I tried to act nonchalant about the news, but I was incredibly relieved.

In my walks around the retreat center, I had found a lovely spot to pray. It was close enough to the river that I could hear the water as I sat under a gnarly looking tree. The tree looked like it was riddled with tumors and it leaned at an impossible angle.

As I waited on that call from the doctor’s office, the tree became a metaphor for me and also a sign of hope.

The tree had tumors, but remained strong and refused to fall over. If I got the call and it turned out the “situation” was Ovarian Cancer, I would be like the tree. I would be strong and even beautiful, despite any tumors.

But then the call came and I was flooded with relief. My plans to be strong in the face of adversity could remain that—plans, not a reality.

My doctor and I monitored the “situation” for a few more months before deciding that the cysts, while not cancerous, were problematic enough to warrant surgery. I, for one, was tired of the rigmarole of all the monitoring. Surgery was inconvenient, but it would be the last inconvenience so it was worth it.

In November 2018, I had an oophorectomy. I like to pronounce it:

OOF or ect Oh Me

I thought it was hilarious that the surgery sounded like a combination of two phrases you really don’t want uttered during surgery, “oof” and “oh me”! The surgery staff told me I could pronounce it however the heck I wanted since it was my body being operated on.

A week later, I had a follow-up appointment with my doctor. I thought it was a standard thing to follow up, in person, with the doctor following surgery. I thought he wanted to check my incision and make sure I was healing well. I thought nothing of the fact they squeezed me in as an appointment at the end of the day. My husband offered to come and I told him it was no big deal, just a quick follow-up.

I was the last patient in the office that day. I think most of the staff had clocked out by the time the doctor came into the exam room where I waited. He didn’t want to make eye contact and he seemed disappointed that I was there alone.

That’s when I realized this wasn’t a routine follow-up appointment.

He slowly, kindly, explained: “As soon as I saw the ovary, I realized we weren’t dealing with just cysts. It was a tumor. We’ve got the pathology report back, you have a form of Ovarian Cancer called GCT.”

He felt confident he had removed it all, but he referred me to a Gynecological Oncologist for further treatment.

That led to another, bigger, surgery a couple of weeks later. I had a complete hysterectomy, plus a little more. By Christmas, I was NED (No Evidence of Disease).

I now have bloodwork done every three months and sometimes a scan if the bloodwork comes back elevated. The rigmarole of all the monitoring is now a way of life.

GCT is a rare, slow-growing, form of Ovarian Cancer. If it is not caught early and removed properly, it can be almost impossible to stop.

The GCT cells leave the ovary area and attach themselves throughout the abdomen, the liver, the gall bladder, etc. Because the tumors grow slowly, they are very difficult to detect. By the time you have signs and symptoms, you are in a dangerous situation. GCT is not responsive to chemotherapy or most other forms of treatment, leaving patients with few options.

My advice, and caution, to women and those who love them, is this: know your body and advocate for yourself when you can feel that something isn’t right. Go through the rigmarole, put up with the inconvenience, make yourself a priority. It’s your one life.

If she can hold steady, then maybe I can, too.

What about you? Has something about life left you feeling gnarled? Do you see the beauty in that? Tell me about it in the comments, in an e-mail, or on Facebook.

To hear me tell my store about finding out I had cancer, you can listen to this episode of the Discovering Our Scars Podcast.