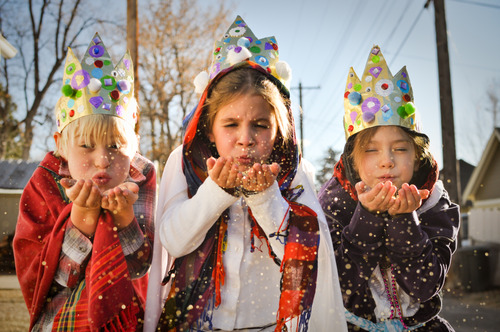 I’ve had an epiphany! Actually, we’re all having another Epiphany.

It’s more than a sudden inspiration; it’s a season on the church calendar. It’s the time of year we celebrate the arrival of the Wise Men.

The Wise Men were astrologers. They were star and sky readers.

A star led the Wise Men to Jesus, but if you read the story closely, it seems like they got lost along the way.

I can relate to that. Sometimes I, too, get lost on the way to God.

The Wise Men knew “the king of the Jews” had been born because they “observed his star at its rising.” (Matthew 2:2)

The Wise Men knew something incredible had happened, but they weren’t sure where to go. We think of the Wise Men gathered around Jesus in Bethlehem, but before Bethlehem they went 4.5 miles north to the big city of Jerusalem.

At some point, the star must have disappeared because the Bible tells us it reappeared when the Wise Men left Jerusalem. (Matthew 2:9)

The Wise Men depended on the star, but when they weren’t able to see it, they didn’t stop searching.

I’ve experienced the incredible (indescribable!) love of God in my life. Those are star-seeing moments. Other times, if the star is there, it’s well-hidden in a foggy night sky. During those times, the challenge is to keep searching, hoping the star will show itself again.

In Jerusalem, the Wise Men asked around for “the child who has been born king of the Jews.” (Matthew 2:2) Herod, the regional puppet king installed by the Roman Empire, asked the chief priests and scribes for help. They told Herod that, according to the prophets, the Messiah would be born in Bethlehem. (Matthew 2:3-6) “Herod secretly called for the Wise Men and learned from them the exact time when the star had appeared. Then he sent them to Bethlehem.” (Matthew 2:7-8)

We tend to think of the Wise Men peacefully following the star all the way to Bethlehem, but that ignores this major hiccup in their journey.

If you’re like me, you’ve always pictured three robed men riding camels through the desert at night, following the light of the brightest star in the sky. As with most things in life, it turns out it wasn’t that simple.

I’m glad the Wise Men had this glitch in their journey. Like the Wise Men, I go from star-seeing moments to periods of wondering what to do next.

I also appreciate that the villain (King Herod)—not the star—sent the Wise Men towards Bethlehem. God doesn’t always speak to us through the people we expect, or use us in the way we expect.

One time a door-to-door salesperson came to my house. I don’t normally answer the door, but that day I did. It turned out the woman was selling magazines I didn’t need. Instead of being annoyed at the interruption, I invited her in. We sat on the couch together and had a 45-minute conversation.

I learned that she was a recovering drug addict, trying to get back on her feet after being incarcerated. I learned that the company she was working for was probably taking advantage of her. I learned that despite her circumstances, she was glowing with the love of God.

Before she left, we shared a moment. It’s hard to explain, but it felt like the veil between heaven and earth thinned, and God’s love spilled through, covering both of us.

God unexpectedly used two strangers to share His love, and I hope I never forget it.

The Wise Men didn’t have an effortless journey, but it ended well.

“When they had heard the king, they set out; and there, ahead of them, went the star they had seen at its rising until it stopped over the place where the child was. When they saw that the star had stopped, they were overwhelmed with joy.” (Matthew 2:9-2:10)

After the Wise Men left Herod, the star came back and led them the rest of the way. When they arrived at Jesus, they were overwhelmed with joy.

That’s what it’s like when we find God and discover that He loves us. We are overwhelmed with joy.

What about you? Do you ever get lost on the way to God? Have you had some glitches in your journey? Have you ever been overwhelmed with joy? Tell me about it in the comments, in an e-mail, or on Facebook.