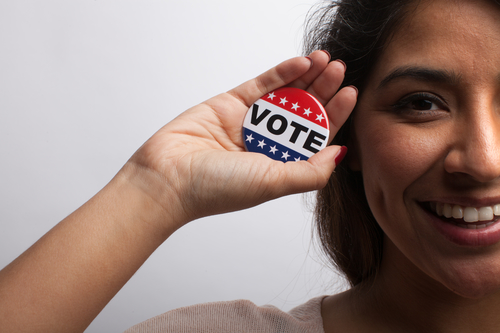 After three debates, a handful of scandals, and some terrific SNL skits, I feel a little flummoxed by this year’s presidential election. It’s not that I am an undecided voter, I have decided.

On the off-chance you’re interested, it was basically a 5-step decision-making process for me:

All in all, it’s been a good election cycle for me in terms of soul searching and deciding what is important to me.

If I’m really honest, I can thank Donald Trump for that.

I’ve been a loyal Republican for a long time. I would never have looked beyond the GOP candidate if the candidate had not been so unqualified and, truly, reprehensible. Thanks Donald! You gave me a YUGE opportunity to become a better person.

Although I won’t vote for Trump, I know many devoted Christians who will vote for him. I know their political views because I see them on Facebook. It’s the best place for politics. Really, the best.

People from both sides of the aisle quote scripture and invoke God’s name in an attempt to persuade voters.

Actually, more often I hear scripture used to try to scare voters. Hence, either Hillary Clinton is the Devil or a Donald Trump presidency will accelerate the end of the world.

Seriously, we have polling data on whether Hillary Clinton is The Devil. As for Donald Trump, he is either a modern-day King David, or he’s more like drunken Noah or that incestuous Lot from Sodom. At least one man says God started telling him in 2011 that Donald Trump would win this election.

Who’s right? Who’s side is God on anyway?

Well, to be blunt, God is on my side.

God isn’t waiting to see how I vote on November 8 to decide if I’m lovable. God isn’t keeping score on a cosmic ledger to see how often I make the right decision and how often I don’t. When I get to heaven, I don’t believe God will play video of me in the voting booth on November 8, 2016 and then ask me to explain myself.

Some Christians ooze peacefulness because they trust God with the outcome of the election. That’s not quite what I’m saying.

This election has brought up more feelings for me than any other election in my life. And lest you think I have been a disinterested voter, I have a bachelor’s degree in political science. More to the point, I remember weeping with relief when Ronald Reagan won re-election in 1984. I was only 9 years old, but I did NOT want Mondale to be our President!

Election feels are not completely new to me, but this one has more.

Maybe it’s because I’m older, because I’m a mom, because I have time to study the issues and develop opinions, or maybe there is something truly unprecedented in how our country is responding to the current candidates, but whatever the reason, this election has left me feeling more unsettled than all the others.

When I feel unsettled, I turn to God. I pray more, I read more, I reflect more. As I focus on my relationship with God, I find more peace.

In that peace, I remember my calling to be a maker of peace. (Matthew 5:9)

I remember I am not the only one made in the image of God.

I remember God is on every side of this election, including mine, but not only mine.

This election is about a lot of important issues. People of faith all across the country are prayerfully preparing to vote. I believe God will be with each of us as we go forward, even when we cast our ballots differently.

We can hold different political views without becoming enemies. We can disagree and still be friends.

As the Apostle Paul said: “What then are we to say about these things? If God is for us, who is against us?” (Romans 8:31)

What do you think? Do you have a sense that God is with you, regardless of election outcomes? Has this election brought you any new awareness of your own beliefs? Tell me about it in the comments, on Facebook, or on Twitter.