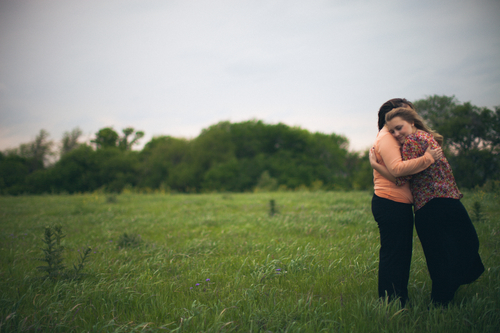 How To Go From Despair to Delight

Maybe you, or someone you know, really needs that kind of transformation right now. For Mary, it happens when Jesus calls her by name. It happens when she understands God really knows her, and cares for her.

In John 20, we find Mary in the wake of the crucifixion and burial of Jesus. It is pre-dawn, with its literal and metaphorical darkness. Mary wants to feel close to Jesus in the wake of his death and to pay respect to her fallen friend, teacher, and leader. Just like we might do in the days following a close friend’s funeral, Mary visits his grave.

As she approaches, she realizes, with horror, that something is amiss. She runs back to the other disciples and says, “they’ve taken Jesus out of the tomb!”

Two disciples immediately run to the tomb and have a look around. They agree that Jesus isn’t there and then head back home. But Mary? Mary lingers.

She stands there weeping.

I imagine her with tears rolling down her face and onto her dress. In my mind’s eye, she’s crying so much that her nose is running and even her headdress is marked by her overflowing tears.

Still crying, she bends over to look at where Jesus’ body should have been. She never intended to look inside the tomb that day, but finding it open, what choice did she have?

As she looks onto the stone bed where Jesus was laid, she sees two angels. She’s not afraid. She doesn’t gasp in horror. She doesn’t seem surprised—maybe she’s too numb for any of that. Seeing the angels, she doesn’t stop crying. The angels ask her, “why are you weeping?”  Mary knows exactly why she’s weeping: “They have taken away my Lord, and I do not know where they have laid him.”

At this point, Mary turns around. Maybe she wants to go look for Jesus’ stolen body or maybe she just doesn’t want the angels to see her tears anymore. As she turns around, she sees who she thinks is the gardener. She is still weeping and so the gardener, who is really Jesus, asks her, “why are you weeping? Who are you looking for?”

It’s not until a moment later when Jesus calls her by name, “Mary!”, that she sees who is in front of her. In the fraction of a second it takes Jesus to utter those two syllables, Ma-ry, she goes from despair to delight. She says in Aramaic, “Rabbouni!” and she grabs him.

Probably she falls to his feet and grabs onto his ankles, but I like to imagine her giving him a giant bear hug.

I would, wouldn’t you? Putting aside the divinity of Jesus for a just a split second, imagine if you went to the grave of someone you dearly loved and, suddenly, they were standing in front of you looking whole and clean and … huggable.

Haven’t you ever thought, “oh, what I wouldn’t give to hug him one more time!”

Well, this is Mary’s chance for one.more.hug.

Jesus says, gently I think, “Mary, don’t hold onto me. I haven’t yet ascended to the Father.”

I like to imagine Jesus pausing in the hug, maybe breathing in Mary’s presence just as she is breathing in his. Not in a romantic way, but in the way of deep, sentimental, familial love.

Sort of the way I hug my children now because they are teenagers and the hugs come less frequently. I hug them and I take a deep breath, sure to enjoy every part of the moment even as I imagine love pouring out of every pore of my body, enveloping them and giving them what they need for the day.

Jesus tells Mary she’s got work to do.

He assigns her the task of being the first evangelist. The one who will declare the truth of the resurrection: “Go to my brothers and say to them, [Jesus says] ‘I am ascending to my Father and your Father, to my God and your God.’”

Mary no longer lingers. She leaves and announces to the disciples, “I have seen the Lord!” Her transformation from despair to delight is plain as day because her cheeks are no longer tear-stained.

The disciples don’t ask, “Why aren’t you weeping any more?” She tells them the reason before they even think to ask. She has seen Jesus, her Rabbouni, and everything is going to be okay.

Can you relate to Mary in these moments? Can you imagine what it was like to go to the grave of her beloved teacher and friend, only to find the unthinkable—his resurrected form standing before her? Put yourself in Mary’s shoes and walk through the morning. What does that feel like for you? Tell me about in the comments, in an e-mail, or on Facebook.