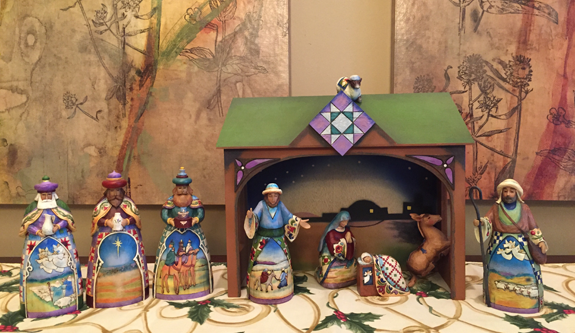 Here’s a picture of the Nativity in my house right now. Disclaimer: After taking the picture I noticed the position of the lamb and the donkey. I blame my irreverent, but always hilarious, children.

This December, as I’ve done every December of my adult life, I put out a Nativity scene.

I bought this one eight years ago. Usually, I put it in the dining room, a place I can see it every day.

I love how colorful this one is and how pretty it looks on the table. Sometimes I forget this is (or can be) more than just another Christmas decoration.

It’s possible the Nativity has become such a ubiquitous part of my December decorations that I’m at risk of losing sight of its significance.

The Nativity scene represents the night God did something so unbelievable it changed the world forever.

For one thing, the Nativity reminds us that Jesus was human, like us. I need this reminder.

It’s easy to think about Jesus’ divinity, but the Nativity reminds me of his humanity.

Jesus is God incarnate; God in the flesh. Some people might think, “yeah right, that sounds pretty unbelievable.”

The idea that God, an indescribable force beyond my comprehension, would choose to inhabit a human form is pretty unbelievable.

But as a Christian I understand that God did the unbelievable thing. God did something incredible and unbelievable to bring His renewing love into the world. God goes to amazing effort to communicate his love to us.

The Nativity scene also reminds me that God entered the world in the most humble of ways.

Jesus was born in a barn to an anonymous couple instead of a King and Queen in a stately palace.

His birth wasn’t announced to the religious people. Angels came to a group of lowly shepherds, and a star led a small group of foreigners.

Some say it was St. Francis about 800 years ago who decided to set up a Nativity to remind people “that Jesus came to us not as a rich king but as a poor child.”

Thank you for that reminder, St. Francis. Eight centuries later, it’s a reminder I still need.

The Nativity is a reminder and a point of connection with the past.

The Nativity scene in my dining room connects me to two thousand years of people who have experienced God in their lives.

I can look at the Nativity scene in my dining room today and understand what St. Francis wanted to communicate nearly a millennium ago.

I can look at that Nativity scene and get a glimpse of what the shepherds experienced two millennia ago as they stood with Mary and Joseph.

The Nativity scene in my dining room is just a set of figurines. They are lovely, but what they represent is even lovelier.

These figurines remind me of the night God changed the world. They also remind me of the humanity, and humility, of Jesus. They connect me with the generations of people before me who have experienced God’s love.

It’s nearly time to pack the Nativity away, safely stored for its re-appearance next December. In the meantime, I’ll remember the message it represents isn’t seasonal, it’s timeless.

What about you? Do you have a Nativity scene set up in your house or your yard? Is its significance sometimes lost on you during this busy season? Tell me about it in the comments or, even better, email me a picture!