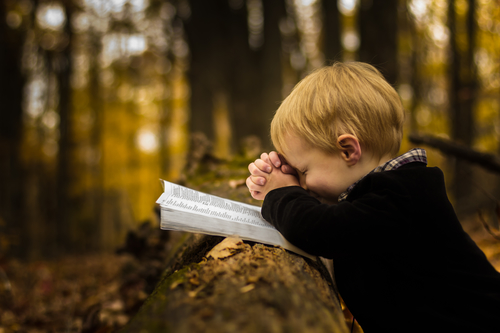 Jesus says in the Beatitudes, “blessed are the peacemakers, for they will be called children of God.” (Matthew 5:9) One Bible commentary says that “peacemaker” here doesn’t mean someone who avoids conflict. Instead, a peacemaker is someone who promotes the wholeness and well-being of others.

It would be great if Jesus was telling me to actively work for the welfare of my family and friends. But Jesus being Jesus, I think there’s a challenge here to do the harder thing. It seems that a real peacemaker actively works for the well-being of those with whom they disagree.

Being that kind of peacemaker is especially hard right now, in the midst of an election year and on the heels of a contentious United Methodist General Conference.

I’m a relatively new Methodist. My husband and I joined the UMC about nine or ten years ago, but this was the first time I paid any attention to General Conference. Every four years elected delegates (some clergy, some not) get together for days and days of meetings where they make the rules for our denomination. That set of meetings is called General Conference and the rules are published in The Book of Discipline. Just to give you some perspective on how many changes the delegates face, they each received a 1,488 page book of proposed rule changes.

I’m not sure how it has come to pass that General Conference always happens in the same year we have a US Presidential election, but I don’t think our timing helps promote healthy conversation and accord.

I won’t rehash for you everything that happened at General Conference, but you can go here for a good summary. Within the UMC there are sincere disagreements about important issues.

Disagreement doesn’t trouble me. What worries me is our inability to discuss those disagreements with humility and kindness. As I followed the General Conference happenings, I often felt my church was in self-destruct mode.

As a Republican, it was a familiar feeling. My political party has self-destructed by failing to cultivate and advance candidates who are actually qualified to serve as President of the United States.

If you feel Donald Trump is qualified, I hope you will allow me to respectfully disagree. Despite what several athletes have recently claimed, building a “first-class” golf course, resort, or office building is not the same thing as governing the United States of America.

I cannot vote for a candidate who aligns himself with the Ku Klux Klan or retweets (either ignorantly or intentionally) tweets from White Supremacists and deceased fascists. (In case you are curious, here is an article from Fortune magazine about this aspect of Trump’s campaign.)

I can’t cast my vote this way, but that doesn’t mean I hate you if you can. I won’t vote for Donald Trump, but I don’t hate him. Hating someone for hating people doesn’t even make sense, does it?

I doubt I’m the only UMC GOP person who sees the uncanny timing of the talk of schism in our denomination and in our political party.

Yes, Chicken Little, maybe the sky is falling. What can we do about it?

Jesus says the blessed include those who are meek, merciful, or pure in heart, and those who are peacemakers. (Matthew 5:5, 5:7-9)

I wish I saw more of those qualities in my political party and my church.

Actually, I wish I saw more of those qualities in myself.

Am I a peacemaker who actively works for the well-being of people who disagree with me?

Nope. I’m more likely to ignore or dismiss those who disagree with me than I am to pray for them.

My solution? See their faces and pray for them by name.

It’s harder for me to villainize or dismiss someone when I look at their picture. Seeing their face reminds me of their humanity and their inherent worth.

I did a Google search for the political frontrunners, specifically for their angry face. I also found a photo of someone within the UMC whose hyperbole has particularly bothered me. Lastly, I found a photo of a leader within the King James Version only movement (which declares any translation other than the KJV to be false). I stuck them together as a graphic, printed it out and put it where I pray. The butterflies in the background are a not-so-subtle reminder to remain optimistic. 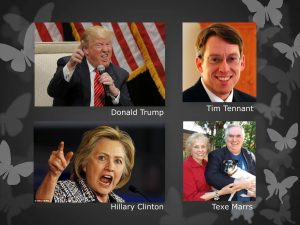 Praying for these people is hard for me. It’s hard to look at their faces and pray for their wholeness and well-being, knowing the discord they represent.

Sometimes I want to give up, especially when I think about how unlikely they are to pray for someone who, like me, disagrees with them.

But then I remember I can’t change them. Praying smaller means recognizing my own need for change and inviting God to work on me. Maybe right now God is using them to change me into a peacemaker. Maybe …

What about you? Do you pray for people you don’t like? If so, am I now on the list? I hope not. I hope that even though I delved into politics and religion today we can still be friends. Tell me about it in the comments, in an e-mail, or on Facebook.