For the last couple of years, I’ve worked with middle-school girls in the youth group at our church. The girls are at the beginning of the journey to figure out who they are and who they want to be.

I love watching this journey, despite the jerky starts and stops.

Last year one of the girls asked if we could write encouraging messages to each other at the close of each session. I supplied pens and paper and they supplied the encouragement. I was cleaning off my desk the other day and I found this one: 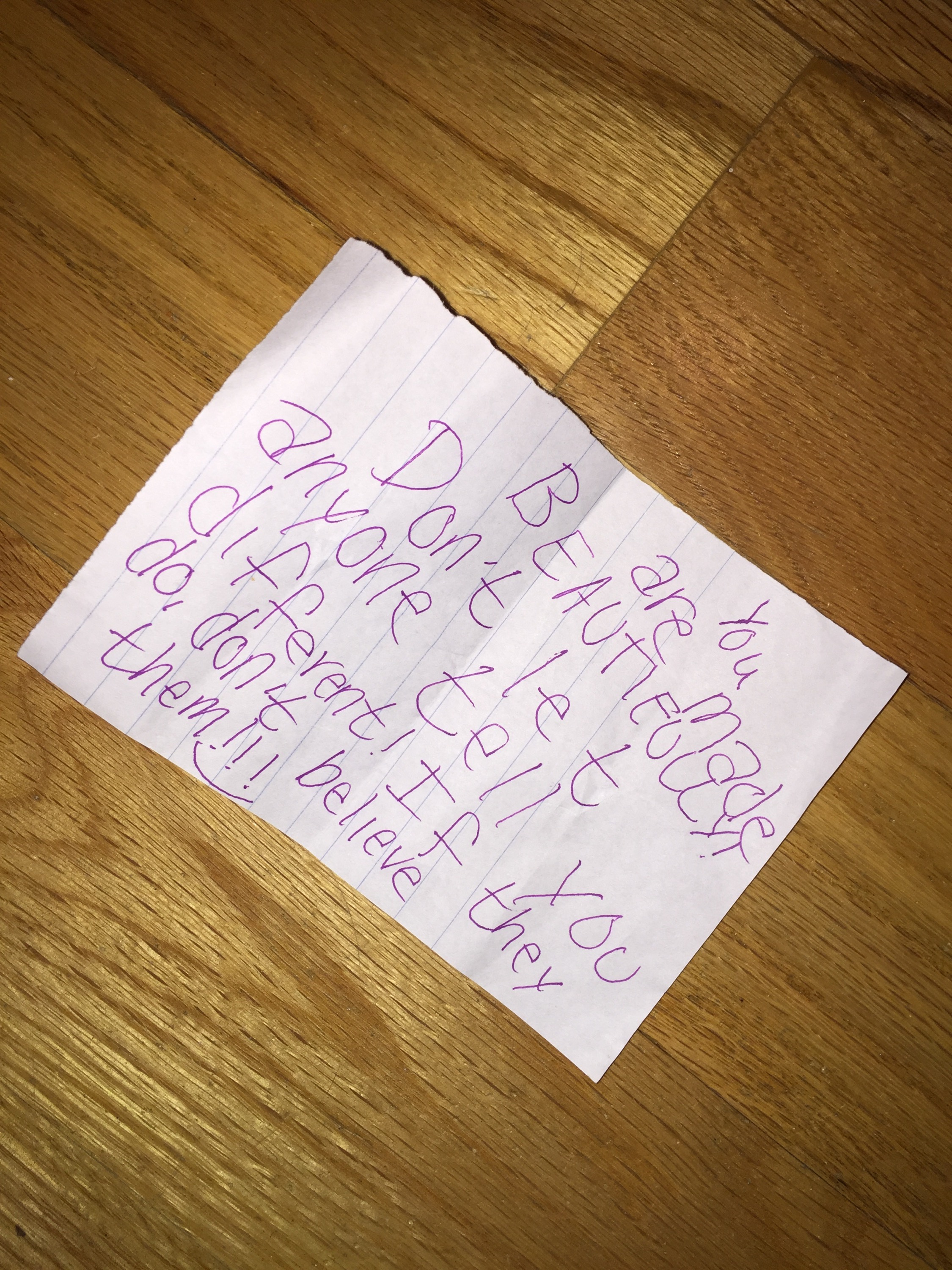 “You are made beautifully. Don’t let anyone tell you different! If they do, don’t believe them!!!”

The notes were never signed and we chose them randomly from a basket. I don’t know who wrote this one and, to be honest, I don’t even remember when I received it.

These three sentences aren’t about physical beauty. They are about inherent lovability.

I want to ignore the voices that say I’m not good enough, but wanting to ignore them and actually ignoring them are vastly different!!!

I’m learning that some ideas about whether we are lovable get corrupted at a very young age, before we even understand what is happening.

After a speaking engagement a few months ago, a crying woman approached me. As the tears flowed silently down her cheeks, she told me it was hard to believe she was beautifully made. I asked her why and she explained that when she was a young girl, her mother told her—repeatedly—she was an ugly, worthless, mistake.

As an adult, this woman could see how wrong her mother was. She understood intellectually that her mother’s lies were the result of her mother’s pain. She saw that the false declarations had nothing to do with her.

As the mother of little girls, she vowed not to make the same mistake.

And yet, knowing it was a lie, knowing she was a child of God, knowing she was neither ugly nor a mistake, wasn’t enough. She knew it in her mind, but her heart was still holding on to those painful untruths.

I wish I had been able to hand her this note written by a twelve year old. Could the small girl inside her have somehow received the message more completely from someone closer to her own age?

Maybe there are times we know more at twelve than we do at twenty-eight or thirty-eight or sixty-eight.

Sometimes we hold on to the lies instead of fighting for the truth. We dismiss compliments, but hold on to criticism. We try to please all the people all the time, even though we know it is impossible.

We internalize criticism and carry it with us … for decades.

The woman I met couldn’t transform her head knowledge into heart knowledge. She couldn’t dismiss her mother’s criticisms.

Why? Because it’s easy to forget: “You are made beautifully. Don’t let anyone tell you different! If they do, don’t believe them!!!”

What about you? Do you hold on to criticism or do you easily reject the untrue? Tell me about it in the comments, on Facebook, Twitter, or via e-mail.