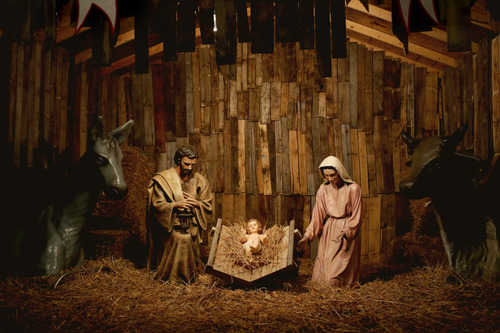 In Bible 100, I teach the entire Bible in 100 minutes, or less. My goal is to help you learn the Bible, without telling you what to think. This is a sample of the style I use in that workshop.

The birth of Jesus is celebrated by Protestant and Roman Catholic churches on December 25 each year, and a few days later by our friends in some Orthodox Christian churches.

The events leading up to the birth of Jesus are described in two places in the Bible, the Gospels of Matthew (1:18-2:12) and Luke (2:1-20). Luke’s Gospel provides most of the familiar details we know about the Christmas story from church Nativity plays, but we have to read Luke with Matthew to get the complete story.

Luke’s Gospel tells us about Mary, a young woman from Nazareth, who was engaged to a man named Joseph. The angel Gabriel visited Mary and told her she would conceive and bear a son through the Holy Spirit. Mary bravely responded to Gabriel, “Here am I, the servant of the Lord; let it be with me according to your word.” (Luke 1:38)

Mary’s out-of-wedlock pregnancy was surely surprising. Matthew’s Gospel gives us a glimpse into Joseph’s experience. Joseph did not want to expose Mary to public disgrace, but he also did not want to marry her. He “planned to dismiss her quietly.” (Matthew 1:19) Before Joseph could end the engagement, an angel visited him in a dream and told him not to cancel his engagement with Mary. The angel explained to Joseph that the child Mary was carrying in her womb was conceived by the Holy Spirit and would “save his people from their sins.” (Matthew 1:20-21)

Matthew’s Gospel says Joseph “did as the angel of the Lord commanded him; he took Mary as his wife.” (Matthew 1:24)

The Gospel of Luke tells us that before Mary and Joseph made it to the Little Wedding Chapel of Nazareth, there was a decree from Emperor Augustus requiring Joseph and a very pregnant Mary to leave Nazareth for Bethlehem.

Both Matthew and Luke tell us Jesus was born while Mary and Joseph were in Bethlehem. (Matthew 2:1; Luke 2:6)  The baby was wrapped in bands of cloth and placed in a manger “because there was no place for them in the inn.” (Luke 2:7)

In the Gospel of Luke, shepherds near Bethlehem were “keeping watch over their flock by night” when an angel stood before them and announced the birth of the Messiah. (Luke 2:8-9) A “multitude of the heavenly host” praised God, saying “Glory to God in the highest heaven, and on earth peace among those whom he favors.” (Luke 2:14)

Although Matthew’s Gospel doesn’t mention these shepherds, it tells us about another important group of men who were called to celebrate the birth of the Messiah.

Matthew’s Gospel reports that after Jesus was born, “wise men from the East” followed a star to Jerusalem. The men had a brief and unproductive meeting with King Herod and then followed the star to Jesus. “When they saw that the star had stopped, they were overwhelmed with joy.” (Matthew 2:10) The wise men offered Jesus gifts of gold, frankincense, and myrrh.

The Nativity is complete.

That’s the Christmas story Bible 100 style. Are you like the wise men? What star are you following? What makes you feel overwhelmed with joy? What gift would you offer? Tell me about it in the comments, by e-mail, or on Facebook.