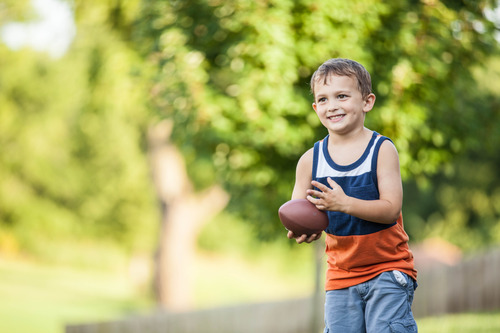 Lean in close, I have a secret to tell you.

It’s a secret because for twenty years I’ve made my husband think it was his idea to turn on the game. I’ve made it seem like I was doing him a favor by watching the game with him.

For the first few years of our marriage, it really was his idea to turn it on. I really did watch the game just to spend time with him.

Somewhere along the way, I began to enjoy the game. I became a direct fan rather than a fan-by-marriage.

There are plenty of people who don’t enjoy football or any other sports. I get it. Sometimes it seems pointless, or worse—barbaric.

I think that amidst the pointless barbary, football teaches players and fans an essential life lesson: perseverance produces maturity and completeness.

Allow me to explain, and try not to get distracted by how awesome the names are. Player names are another reason to love football, but that’s a different blog post.

This is a screen shot (literally – it’s a picture of my tv screen) from the FSU v. USF game on September 12, 2015.  Florida State is my alma mater and, therefore, my favorite college football team. 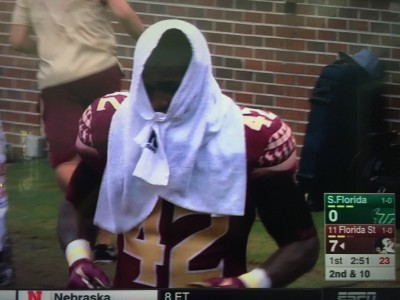 The young man hiding under the towel is Lamarcus Brutus. Lamarcus is a senior and a leader. In fact, he was a team captain for this particular game.

As his teammate Jesus “Bobo” Wilson returned a punt, Lamarcus tried to clear his path. In the process, he made a big mistake. Lamarcus tackled a USF player, Lamar—not Lamarcus—Robbins, in such a way that their helmets crashed together.

Lamarcus was ejected from the game for his mistake. Through my mommy-eyes, it looked like he was pretty upset with himself. Maybe he even teared up.

The “upstairs” referees reviewed the film and agreed with the ref on the field. Lamarcus aimed his helmet at Lamar’s helmet. The targeting penalty was upheld. For Lamarcus, the game was over too soon.

No one could fix it for him. His teammates couldn’t change the call. His coaches couldn’t remove the penalty. His fans couldn’t do anything to keep him on the field. His parents couldn’t call the school and demand that Lamarcus be excused from the consequence just this once.

Accepting the consequences of mistake is a form of perseverance.

Lamarcus Brutus persevered. He came back the next week and got four tackles. He could have given up. He could have decided football was too hard or had too many rules, but he made the better choice. He kept playing.

In a New Testament letter, James writes: “Perseverance must finish its work in you so that you may be mature and complete, not lacking anything.” (James 1:4, NIV)

As a mom, I think this is the hardest part of parenting.

I want my children to learn perseverance, but watching them endure the consequences of a mistake is no fun.

I could spare myself the “no fun” times, but that would be a disservice to my children.

Oh, you didn’t do your homework? Well, let me call the school and explain you were busy playing XBOX. After all, we wouldn’t want a bad grade to show up on your permanent record! I’ll ask the teacher to excuse you from the consequence just this once.

Intervening to save my kiddos from every consequence deprives them of an opportunity to learn from their mistakes.

Hopefully, the small struggles my children face growing up will be enough to develop their perseverance for the bigger struggles that await them in adulthood.

I want perseverance to finish its work in them so they will be mature and complete, not lacking anything.

What about you? Are you long on perseverance or do you tend to give up? Do you know any parents who try to save their children from consequences? Tell me about it in the comments, in an e-mail, or on Facebook or Twitter.

Note: The targeting penalty was appropriate because head injuries are a huge concern in football. Growing research shows that players sustain subtle, undetectable brain injuries throughout their football careers. Years after retirement players can display symptoms including personality changes, dementia, and depression leading to suicide. For more information, check out this article by my friend Dr. David Geier: The Hidden Dangers of Concussions.