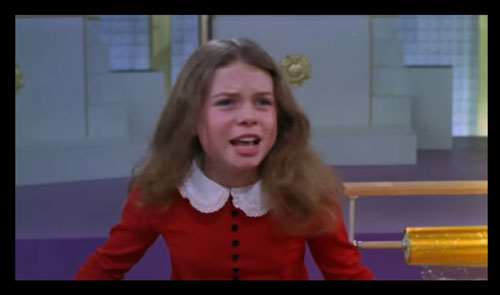 You Are A Good Egg (Willy Wonka Theology)

Remember Veruca Salt? The spoiled brat who got to tour Willy Wonka’s chocolate factory? Her tour ends in the Golden Egg Room. She runs all over the room, having a fit and making a mess because Wonka won’t sell her father a Golden Goose. Her tirade ends when she stands on an Eggdicator. The needle swings all the way to “Bad Egg,” and WHOOSH! Down she goes toward the incinerator. (Watch it here.)

Veruca Salt was a bad egg.

Jesus never tells a parable about a bad egg, but he does talk about bad seed.

In Matthew 13:24‑30, 36-40, Jesus compares the kingdom of heaven to a field where a farmer sows good seed, but an enemy sneaks in at night and sows bad seed. The farmer sows wheat, but the enemy sows the seed for a bearded darnel. A bearded darnel (or tare, or noxious weed, or thistle, depending on your translation) is a plant that looks almost identical to wheat until it’s fully matured.

The field workers offer to pull up the weeds, but the farmer says, “No; in gathering the weeds you would uproot the wheat along with them. Let both of them grow together until the harvest.” (Matthew 13:29-30)

We Christians like to think of ourselves as the good seed, and maybe we are, but I think we also try to be the field hands.  We want to go in and pull up the weeds in the kingdom of God. Jesus tells us in this parable quite directly, “that’s not your job.” He says he and the angels will sort all of that out at the right time. (Matthew 13:39)

Jesus says to let bad eggs, like Veruca Salt and worse, mix with the good eggs.

In fact, God uses bad eggs all through the Bible.

No wonder God doesn’t want me to do the sorting, I would pull up the wrong plants! I judge people by my human observations; I’ll never have God’s perspective on people—and that’s what you need if you are going to decide who’s wheat (in) and who’s a weed (out).

Maybe the best example of this is the patriarch of Israel, Jacob. If he stood on an Eggdicator (at least at certain points in his life), he would have been dropped down the chute for sure. If you don’t know all of Jacob’s story, I would suggest this summary by one of my favorite theologians, Frederick Buechner.

Jacob steals his brother’s birthright and tricks their blind father into giving him his brother’s blessing also.  In looking back on it all, we see that his older brother wasn’t up for the task of carrying out the blessing or living up to the birthright, but in the midst of the story, there’s no way to know.

Lucky for me, too. Lucky for all of us.

God loved Jacob enough to see him as a good egg, even when he acted otherwise. The good news is, God sees you as a good egg, too. Even when you act like a spoiled brat and, like Veruca in the Golden Egg Room, you run through your life making a mess of things, God’s Eggdicator won’t trash you. Why? Because God doesn’t love you because of who you are (or who the world says you are), but instead, God loves you because that’s who God is.

It’s tempting to think we can sort the good eggs from the bad eggs. Sometimes I think I know enough to weed the field. Mercifully, Jesus says, “no I’ll sort it out later.”

What about you? Do you tend to act like you have an Eggdicator? When you think about your life, are there times you’ve been a bad egg? How does it feel to know that God doesn’t love you for who you are, but loves you because of who God is? Tell me about it in the comments, in an e-mail, or on Facebook.