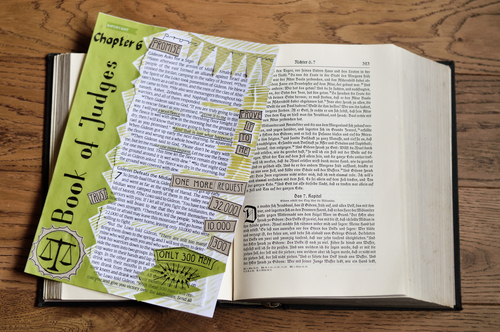 One of the major lessons of the Bible is this: God loves us even when we act unlovable. A great example of a Biblical character who fails to live loved is a man named Gideon.

When we meet Gideon (in Judges 6), he is feeling a little hopeless. The angel says (and I’m paraphrasing here), “nice day we’re having,” but Gideon responds, “what’s so nice about it?” The angel calls Gideon a “mighty warrior,” but Gideon describes himself as the weakest person in the weakest family.

Eventually, God gets through to Gideon. Gideon and a very small army are successful on an important and dangerous mission. Gideon knows he accomplished the task only because God was with him.

To celebrate his triumph, Gideon … <wait for it!>

Created a golden statue … and worshipped it.

The statue actually replaced God for Gideon, his family, and his community. (Judges 8:27)

In the hardest and most uncertain times, Gideon relied on God. Once the hard times were over, Gideon abandoned God and chose to rely on himself and what he created.

I can put myself in Gideon’s sandals.

It’s easy to go to God when I’m worried or the way seems uncertain. I’ve experienced God’s presence and His grace when my need was greatest. And yet, as time unfolds and those moments fade, I find myself explaining away what I once knew.

Instead of celebrating God’s action or presence, I take credit myself and exclude God altogether. I act like I’m self-sufficient.

I call this the Living (Un)Loved Cycle. 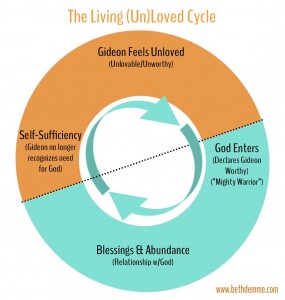 In my life, it plays out like it did for Gideon.

I feel unlovable (or unworthy). This feeling propels me into prayer, reading, and time with God.

Sometimes I turn to God out of desperation. Jesus take the wheel. In those times, I experience the joy and fullness of living in relationship with God.

Then I feel so good I no longer turn to God. That lasts for a while until I, again, perceive my need for God, and the cycle continues.

Maybe you can relate, too?

We aren’t alone. Even in Gideon’s story, God acknowledges our human tendency for self-sufficiency. God says to Gideon, “You have too many men. I cannot deliver Midian into their hands, or Israel would boast against me, ‘My own strength has saved me.’” (Judges 7:2)

God directs Gideon to reduce the army from 32,000 troops to just 300 so the people of Israel (and Gideon) would give God credit for the victory instead of thinking they had succeeded without Him. (Judges 7:2-7)

Despite the way God showed up in Gideon’s life, Gideon still worshipped a golden statue once things calmed down.

For me, the best part of Gideon’s story comes hundreds of pages and twelve centuries later.

In the New Testament, Hebrews 11, Gideon is remembered as one of the Heroes of Faith.

Isn’t that remarkable? Because God’s love endured through Gideon’s idolatry Gideon is remembered as a hero instead of a fool. God’s love is strong enough and deep enough to endure the Living (Un)Loved Cycle.

In Romans 8, Paul explains the staying power of God’s love this way:

I’m absolutely convinced that nothing—nothing living or dead, angelic or demonic, today or tomorrow, high or low, thinkable or unthinkable—absolutely nothing can get between us and God’s love because of the way that Jesus our Master has embraced us.

I guess the best news of all for Gideon and for me is that even when we don’t Live Loved, we are still loved.

What do you think? What stops you from living loved? Do you find it harder to build a relationship with God when things are going well in your life? Tell me what you think on Twitter, Facebook, or in an e-mail.