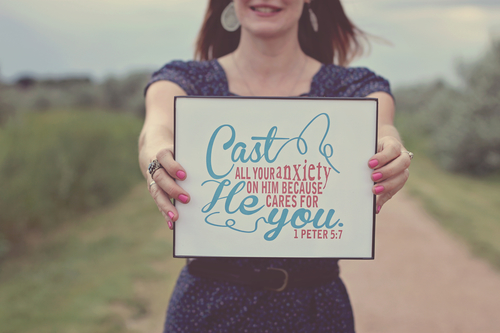 Over time, some Bible verses seem to take on new meaning for me. Maybe you’ve experienced this, too? I can read a verse and think it means one thing, but when I read it again later it has an additional meaning. Or, a verse that didn’t seem meaningful to me suddenly offers a profound insight into my own heart and mind.

This happened recently with 1 Peter 5.

I have had a special, personal connection to 1 Peter 5:7 since I was 13 years old.

When I was 13, I chose to affirm my baptism through the rite of Confirmation in the ELCA (Evangelical Lutheran Church in America). I think for my classmates it was something their parents wanted them to do, no big deal, just another church thing. But, for me, it was something more. It felt important, even necessary.

During the church service celebrating our Confirmation, Pastor Waldemar Meyer (isn’t that a great name!) “gave” me 1 Peter 5:7 as my verse.

Cast all your anxiety on him because he cares for you.

This verse has been a tremendous comfort to me through the years. About three months after Confirmation, my oldest brother was killed. He was taking a shortcut home, following the train tracks from downtown Pensacola to where we lived in East Pensacola Heights. The tracks follow the shoreline of Pensacola Bay. It may even have been a beautiful walk, until the train took his life.

There have been other tragedies and tough times, but the timing of receiving this verse and enduring such an unthinkable tragedy has always felt … important, maybe even prophetic, to me.

I’ve relied on this verse for twenty-seven years (on and off), without paying much attention to the verses around it:

All of you, clothe yourselves with humility toward one another, because, “God opposes the proud but shows favor to the humble.” Humble yourselves, therefore, under God’s mighty hand, that he may lift you up in due time. Cast all your anxiety on him because he cares for you. (1 Peter 5:5-7 (NIV))

Twenty-seven years after 1 Peter 5 first became a crutch for me, it has new meaning.

I was struck this week at the coupling of humility and anxiety.

I’m not good at humbling myself. (Even admitting that is hard for me!) I find it reassuring that this passage encourages humility, but immediately acknowledges the anxiety this can create.

I can be honest with God about my discomfort and humbly move forward because God cares for me.

This is especially good news because I find myself at a point where I need to move forward.

Several months ago I went through a rough patch at church. To put it simply—someone hurt my feelings. A friend and I had a theological disagreement. Pastors got involved. People sent e‑mails. Tears were shed. Friendships were damaged. People told me they could not agree to disagree. I shed more tears, and maybe they did, too.

Here I am, months later, still nursing hurt feelings. Why? In reflecting on 1 Peter this week, the truth whipped through me like a ferocious wind—I have failed to clothe myself with humility.

In the months since the conflict occurred, my pride has risen like an ugly foam.

Humility is hard. To be honest, I would rather be right than humble.

To be even more honest, I would like for “you” (i.e., everyone) to acknowledge that I’m right! Which is, basically, the opposite of humility, isn’t it?

I am still sad over the months-old conflict. For everyone else, it has faded into an unpleasant memory.

I tell myself it’s time to move on, let bygones be bygones, but I have wrapped my sadness in a shell of righteousness instead of a cloak of humility.

No wonder it still hurts. I’ve preserved the pain.

Months later I am still dealing with sore feelings because that’s what I’ve chosen.

A verse that has brought me comfort for nearly three decades now has a new application in my life. Instead of only comforting me, it is challenging me to embrace my need for humility. And, as always, I fall back on the truth at the heart of verse 7, I can do this because “God cares” for me.

When we wrap sadness in a shell of righteousness instead of a cloak of humility, we preserve the pain.

What about you? Is there a verse that has changed in meaning for you over time? Is there a past hurt you’ve preserved with a shell of righteousness? Tell me about it in the comments, in an email, or on Facebook.